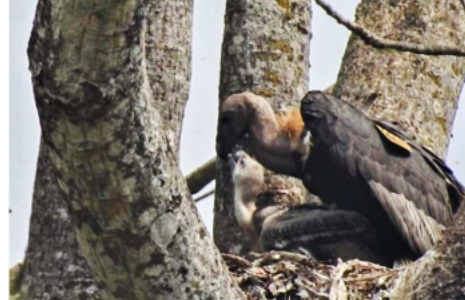 FIRST CHICK HATCHES IN THE WILD FROM THE VULTURE RELEASE PROGRAMME

In particular #C1, an adult captive-reared male, and #C4 an adult captive-reared female have been observed mating and roosting side by side. Both birds were released on 19 October 2019 and have been seen building a nest since the end of November 2020. The nest, which is situated about 25m high in a cotton tree (Bombax ceiba), was built with dry branches, leaves, and grasses. Both individuals have been incubating, although the female spends most of her time at the nest and the male is often standing at the nest’s ledge and on nearby branches.

The news that has been long awaited and hoped for is that this pair has now successfully hatched a chick. In the first week of March 2021 both the parents have been observed feeding at the nest and the team have even managed to take some snapshots.

This is the first time Nepal’s released vultures have bred in the wild and is therefore great news for the programme. Whilst the release of vultures is not straight forward and we continue to adapt and adjust plans as we learn more about what works, it is encouraging to know that vultures can be successfully reared and released back into the wild, learning and adapting and doing what these magnificent birds must do to survive and thrive.