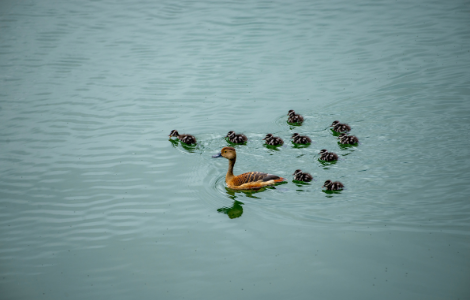 Darwin Initiative's project on "Understanding, Assessing and Monitoring of ecosystem services for better biodiversity conservation" is currently being implemented by Bird Conservation Nepal in three Important Bird Areas (IBAs) with the support of Birdlife International. The main objective of the programme is to build the capacity of BCN and BirdLife Partners in other Asian countries to collect and use information on ecosystem services for better biodiversity conservation. The programme will run from April 2010 to March 2013.

Shivapuri National Park is a protected area lying to the north of Kathmandu Valley. Shivapuri was established as wildlife reserve in 1985 and it was designated a national park in 2003. Shivapuri (2730m) is the second highest mountain that surrounds the Kathmandu Valley. It is the main source of the rivers Bagmati and Bishnumati. The park is equally rich in forest resources. The forest is dominated by Chir pine Pinus roxburghii. Other species include: Alnus nepalensis, Castanopsis indica and Schima wallichii.
318 species of birds have been recorded from here. One critical endangered bird 'White-rumped Vulture' and one endangered bird ' Hodgson's Bushchat' along with 3 restricted range species are found in this IBA. Shivapuri NP also inhabits wildlife like ; Hanuman Langur, Leopard and Indian Muntjac.

Because of its proximity from capital city, Shivapuri NP is the best place for eco-tourism. The park acts as an entrance for the pedestrian travelling to Nagarkot, Gosaikunda, Langtang and Helambu. One can view whole Kathmandu valley from here.

Koshi Tappu Wildlife Reserve, established in 1976, is located to the south-east of Nepal. It has an area of 17500 hectare. The reserve is the most important IBA for the birds. Approximately 70% of the reserve's land is covered in grasslands and during high flood years a large number area of grassland is destroyed. Riverine vegetation with Acacia catechu / Dalbergia sissoo dominates the edges of the reserve.
The large number of 490 species of birds has been recorded in the Koshi Tappu Wildlife Reserve. According to the IUCN redlist, 2 species are critically endangered, 3 species are endangered, 15 species are vulnerable and 13 species are near threatened. The reserve contains Nepal's last population of Asian Wild Buffalo. Other wildlife includes dolphin, otter, mugger crocodile and gharial.

There are a lot of natural resources important for the livelihood of the local people at Koshi Tappu. People have produced bio-fertilizer and briquette out of water hyacinth. Water logged areas have been well managed and converted to fish farming ponds. Weeds are used to make mats and attractive handcraft materials. There are still a lot of natural resources utilized through traditional skills for livelihood in Koshi Tappu Wildlife Reserve.

Rara National Park is the smallest protected areas situated to the north west of Nepal. The park has an area of 10,600 hectare and is famous for the biggest lake of Nepal 'Rara'. The park located in the mountainous region is important for its scenic beauty. Forest comprises Pinus wallichiana, Quercus semecarpifolia, Abies spectabilis, Betula utilis, Juniperus spp. And Rhododendron spp. Snow capped mountains and coniferous forests at the edge of the lake has contributed additional beauty to the park.

235 species of birds have been recorded from this park out of which 2 species are globally threatened and 3 species are restricted range species. This IBA is important for the vulnerable bird 'Cheer Pheasant'. Other wildlife includes Red Panda, Asiatic Black Bear and Musk Deer.

Expected outcomes from the project