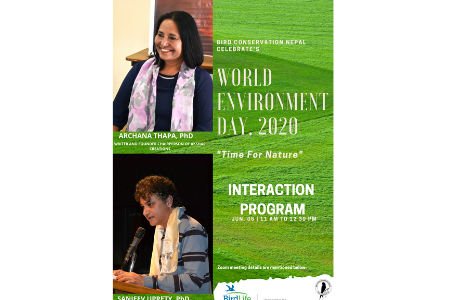 BCN organized a web interaction program with renowned nature literary figures of Nepal; Archana Thapa, PhD and Sanjeev Uprety PhD to celebrate World Environment Day 2020|Time for Nature. A one and half hour long session witnessed participation of more than 60 including representatives of BCN Executive Council Board, members, students, bird and nature lovers.

Archana Thapa, writer and founder member of Akshar Creation began the session with her insightful speech on “Glamour of the city, biodiversity and plastic pollution”. She shared that various incidents from bulging pandemic, locusts insects creating havoc across farms of Indian Subcontinent and humongous wildfire in Australia have caused irreparable damage and should be taken as an alarm for human race that is so eager to destroy our only home. Biodiversity is a vague term and incorporates variety of plant, animal life in the world.  We consume vital services biodiversity for free and are worth of billions if we tag the price on its services.  But humans despite tagging ourselves as the most responsible species are the major cause of the biodiversity depletion all across the world. She said, “We take pride in being civilized because of our technological and mega infrastructure achievements but recent incidents of killing mother elephant in India, caste conflict in our nation certainly raises the question our moral obligation to humanity and to Mother Nature.”  She also shared her concern over massive plastic consumption that is taking toll on nature. Our irresponsible use of plastics have adverse effect in nature.

Sanjeev Uprety , writer and philosopher began second session sharing self-reflecting speech on “Mankind  and Nature Relationship”.   He shared his personal experience of how spending more time in nature has helped him feel better and understand the existing differences in our society. Sighting example of Saiga Antelopes’ extinction because of rising temperature, he warned that interfering in balance of nature can wipe human existence from the planet. He believes that Heroic mentality rooted in our male dominant civilization inspires to win over everything, even nature. Unlike human, plants and animals have no imaginary boundaries and share little to no response in biodiversity degradation. “I believe plants are more civilized than human”, said Mr. Uprety. “They produce oxygen, they prepare food from themselves and become foods for human but they never boast in social media like many of us ghanachakkars”, he further added.