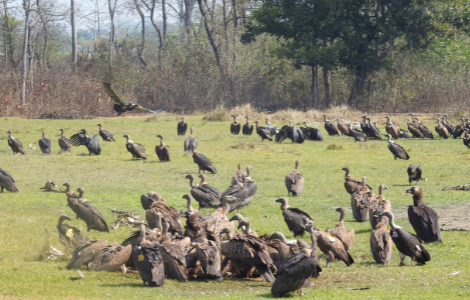 Vultures play a highly important ecological role through the rapid consumption of animal carcasses. They also have an important cultural role in the consumption of human dead bodies in sky burials within Nepal and Tibet.

Out of nine species of vultures, five species of vultures in Asia are in grave danger of extinction across the Indian subcontinent. Populations of White-rumped Gyps bengalensis, Long-billed G. indicus and Slender-billed Vultures G. tenuirostris have declined by more than 99% in India (Prakash et al. 2003; Pain et al. 2004) and Pakistan and annual rates of decline appear to be increasing. Further two more species of vultures, Red-headed Vulture and Egyptian Vulture have rapidly declined in the recent years (Cuthbert et al. 2006). Due to these declines, all five species are now listed threatened by IUCN - The International Union for Conservation of Nature. Except Egyptian Vulture which is listed as Endangered all other four are listed as Critically Endangered which is the highest threat category. In Nepal White-rumped Vultures have been declined over 91% till 2003 (Baral et al. 2004) and declined by 91% till 2011 (Chaudhary et al. 2011).

The cause of these declines has been shown to be the veterinary drug diclofenac (Oaks et al. 2004, Swarup et al. 2007), which is widely used to treat livestock in Asia. Vultures are exposed to diclofenac by feeding on livestock carcasses which contain residues of this drug. A post-mortem examination of dead or dying birds from India and Nepal showed a high incidence of diclofenac residues and visceral gout (Shultz et al. 2004). The result of mathematical modeling is consistent with the observed rate of population decline. Models indicate that only a small proportion (1 in 130) of carcasses contaminated with lethal levels of diclofenac can cause the observed vulture mortality rate (Green et al. 2004).