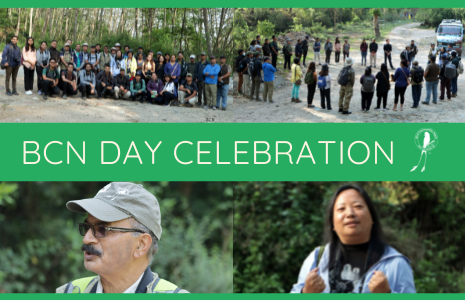 To commemorate 4 decades long journey of bird and biodiversity conservation, BCN organized a birdwatching and interaction program at Godawari IBA, a place that holds special place in bird and nature lover’s hearts on 24 April 2022.

Early morning group of bird lovers, BCN’s executive board members, patrons and staffs gathered at the meeting place and were engaged in brief interaction before bird watching. “The diverse vegetation spread from the foothills to the top makes Phulochowki a birding hotspot that is close to capital” said Prof. Karan Bahadur Shah, President, BCN Executive Council Board. “Easier trail makes this place accessible and if you are in Kathmandu for a short time, this place is a good option to see many birds at one place”, he further added.

“Phulchowki IBA is in crisis of losing its identity because of unplanned development activities. Therefore, on the special occasion of BCN Day, we request our members, stakeholders to work together and raise voice for the conservation of this important habitat”, said Ishana Thapa, CEO BCN. “We wish to dedicate this year for the conservation of this place and plan to organize various advocacy campaigns to make sure that the younger generation too gets to enjoy birding in undisturbed natural habitat”, she further added.

The group began birdwatching after short interaction and introduction session. Around 50 species of bird were observed within one and half hour long walk. Sight of some magnificent birds such as Chestnut-winged Cuckoo, Lesser Racket-tailed Drongo, Crested Goshawk is another incredible example why the place is believed to be a paradise of bird lovers.

“Birds are very important component to promote nature based tourism globally. It is also getting popular as an important activity to boost our mental health”, said Hum Bahadur Gurung, Regional Project Manager for Southeast Asia and Pacific Forest Governance. The half a day event attended by more than 40 participants came to conclusion after reaching to Godawari Kunda by noon.