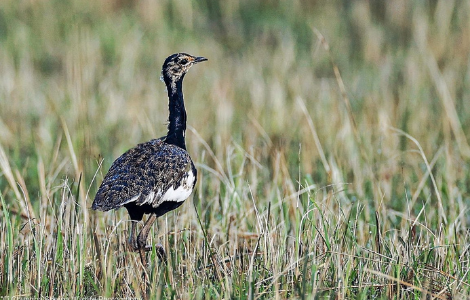 Bengal Florican Houbaropsis bengalensis is a habitat specialised bustard, dependent upon alluvial grassland habitat of terai region. It is restricted to two small and disjunct populations, one in the Terai region of India and Nepal, and the other in Cambodia with global population250-999 mature individuals. In Nepal it is restricted only in Koshi Tappu Wildlife Reserve, Bardia National Park, Chitwan National Park and Suklphanta Wildlife Reserve.

According to BirdLife International, this bustard has a very small, declining population; a trend that has recently become extremely rapid and is predicted to continue in the near future, largely as a result of the widespread and on-going habitat degradation. Therefore it is listed as critically endangered (CR) in IUCN red list of threatened species. Nationally it is evaluated at critically endangered and protected under DNPWC Act 1973. It is listed in appendix I of CITES.

BCN have been working with BirdLife Partners from the UK (RSPB) and India (BNHS) since 2012 to help save this species from the edge of extinction. We have undertaken a programme of research in and around the four protected areas from Suklaphanta to Koshi Tappu trying to address the main issues of:

We undertook surveys to assess the distribution of Bengal floricans throughout Nepal and researched the movements of birds between breeding and non-breeding areas using satellite tracking. The successful deployment of a satellite tag on a male at Koshi Tappu on 1st April 2013 was a first for the Indian Subcontinent and the project went on to deploy 11 tags with 3 on birds in Koshi, 1 at Chitwan and 3 at Suklaphanta. Four tags were deployed on birds in Uttar Pradesh India.